Welcome to the first part of Making Games in ActionScript 3 using FlashDevelop (just rolls of the tongue, doesn’t it?)

People keep asking me if I know any good tutorials for making games in Flash, and I keep answering that I don’t. Most of the one’s I’ve seen have only barely been ported from AS2, keeping the “old flash” mindset and not really making use of the new fancy stuff you can do in AS3. I think that’s a pity!

So, here’s my way of doing it.

This tutorial will assume some basic familiarity with Object oriented programming a graphical tool of your choice and general computer literacy. If anything is unclear, feel free to ask in the comments.

I use the Flash CS3 authoring tool to make my graphics, however, you can use any tool that can export swf’s and for the sake of completeness will show you how to use plain old png’s aswell. But the authoring tool is very hard to beat when doing animations, so consider getting it.
If you don’t have the Flash authoring there’s a trial for the CS4 version.

Start with FlashDevelop, that should be a no-brainer.
(Now would be a good time to install Java if you don’t have that)
Then extract the SDK to whatever folder you’re comfortable with, all you will need to do is to point FlashDevelop to it later, then you can forget about it altogether.
Install the debug player for your browser, FlashDevelops internal player (IIRC) will use the version you install for IE.
Finally put the standalone Flash Player in a suitable directory, it will associate itself with the proper file formats when you run it, so just drop it wherever you want it and run it once. 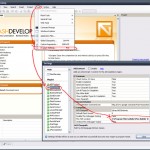 Now, it’s time to start FlashDevelop.
You should be greeted by a nice Start Page. The first thing we will need to do is to setup where we put the Flex SDK.
Go to Tools -> Program Settings… -> AS3Context -> Flex SDK Location (see the picture) and point it to the directory where you unpacked the SDK.

And that’s it. You’re ready to go. Go get yourself something unhealthy to eat as a celebration.

Next time we get started on our first project.