You have arrived at the second part of Making Games in ActionScript 3 using FlashDevelop.

Last time we got stuff setup. Not all that amusing really, just a tiny bit more setting up to go before we can get some stuff on the screen. 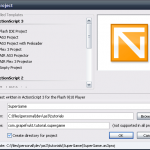 Time to get your feet wet.
Go Project -> New Project…
What we want is an “AS3 Project”, normally the Preloader version is the way to go, but for clarity we’ll use the plain one this time around.

Set the name to whatever you please, I chose SuperGame, for location, use whatever seems suitable.

You can set a package name if you want too, this is just to keep your code separated from other people’s code if you ever use it in your games. The convention here is to use reverse domain naming for packages. So, by that logic I use com.grapefrukt.tutorial.supergame
You don’t need to own the domain or anything, it’s just to keep things separated. You can read more about this in the excellent ActionScript 3.0 Cookbook, but it’s not really that important for now.

That should be it for that dialog. Now, FlashDevelop will create a few template files for you.

As previously mentioned, the package structure is just a way to organize your code, and you can name it whatever you please. However, to enforce a good package structure Flash requires the files to be in folders corresponding to the package naming. So, with the folder src being our source “root”, and com.grapefrukt.tutorial.supergame my package structure, you can see the folders created to accommodate that. The compiler won’t be happy if you don’t put your code in the proper folders.

That’s enough about packages for now (and hopefully for the rest of this tutorial, they’re pretty boring)

Let’s move on to the code.

The file we’re interested in is the one called Main.as, open up that file using the Project panel.

For some reason FlashDevelop will include some code to make sure everything is loaded before running, but we can strip that out for now. Remove the whole init() function and the contents of the Main()

This is about as bare-bones as it gets, Main will be what is normally called your document class. It needs to extend Sprite (there are a few other options aswell, but we’ll get to those later), this is one of the basic Display classes available in Flash.

The trace() function is one of your best friends as a flash developer. Also, we need to make sure the debugging stuff works, so it’s a great place to start.

Once you’ve gotten that little line into your Main() method, check that FlashDevelop is set to compile in Debug mode.
Also, make sure you’ve got your Output panel up, it’s in View -> Output Panel

If you got the External flash player, this is the time to set it up, go into: Project -> Properties… and set the Test movie-dropdown to “Play in external player”. This step isn’t required, you can stick with the default if you like that better.

Once that’s done, click the cute little arrow next to the debug/release field (you can also press F5 if you’re feeling “pro”)

If all goes well there should be a bit of chugging as the largish java driven compiler awakens from it’s slumber and then a loud explosion of impressiveness as it actually compiles your code.

A new tab/window should appear with your as of yet humble Flash game in it, it will be hard to tell if it’s working since we’re not doing any graphics yet, but if everything went as expected the Output panel should hold what we’re looking for:

If the compile seemed to work nicely but you didn’t get that last “Hello world!”-line, you likely only have the Release player installed. It does (unsurprisingly) not bother with sending debug events to the debugger inside FlashDevelop. If so, go back to the first installment of this series and grab the link from there.

That’s it for the second part, next time we’ll be making some graphics appear!

If you want to go and do some reading on your own I really recommend the Flash documentation, it’s among the best docs I’ve ever seen.

As usual, any and all comments/questions are very welcome. Either as comments here, or if you’re so inclined  tweet me!

52 Responses to MGAS3FD 2: The Beginning