I’m very excited to publish this, it’s a toolkit I’ve made under the last few months to be able to get graphics and animations made in flash exported to other formats so they can be used on other platforms. The code is pure AS3 so you can run it using either Flash authoring, Flash Builder or Flash Develop. However, it exports Flash assets, so it won’t do you much good without flash authoring.

It’s not perfect yet by any stretch, but I hope it’s useful enough for people to pick up and use. The code is licensed under a simplified BSD license, so you can pretty much do whatever you please with it, if you end up using it I value any and all feedback, send me an email and tell me what you think!

The project is at https://github.com/grapefrukt/grapefrukt-export

jesus vs. dinosaurs in the america

It’s with great pride that I can announce that we’ll be showing a special reworked edition of our global game jam game jesus versus dinosaurs at the killscreen vs. scandinavia party in San Francisco next week. sadly, if you don’t have a ticket it’s already too late, but fret not, the game will see a release soon.

This also means I’m in San Francisco for the GDC, I will also be attending the Flash Games Summit. If you’re around and want to meet up, drop me an email!

We’ve come a long way together. As of last night glorg is up for all to play on Armor Games. There’s also a review to read by the nice people over at Jay is games.

As I keep mentioning every time I talk about this game, it has music. This music is made by all round awesome dude dannyB. He’s put the soundtrack up on his bandcamp page, as a pay what you want download. Go get it!

As a bonus, this is a small screenshot of how the game looked back in September last year. A long way indeed.

Today I discovered that my blog had been infected with some spammy-type junk, so things will be a bit dodgy as I move this over to my central wordpress installation. But, fret not, things will be back in order asap.

Update: Spent the better part of the day fixing things up, figured it was time for a new theme too, so that’s what’s been taking most of my time. It’s not quite done yet, but it’ll do for now.

One might say that I like t-shirts. Quite a bit, even. So, in an effort to dress the entire planet in these best of garments I join the long line of people selling them on the internet.

I put up a tiny store on my grapefrukt games site, unfortunately you will need to have  a paypal account to pay, but it’s the best I could arrange without making this a huge deal. 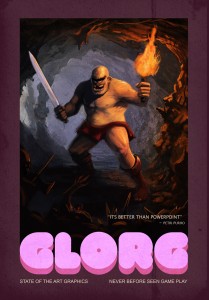 The first commit in my subversion repository for glorg was made the 19th of august last year. Back then it was little more than an experiment with random dungeon generation. In december when gamma announced it’s theme for this year I rejiggered the game to be played with one button. It’s come a long way since then, I’ve added more floors, more enemies and just made it plain better. All that stuff and still just one button.

Back when I was at GDC I met dannyB, he is the most amazing dude and as through some kind of spell he really liked the concept of the game. Deals were made, beers were consumed and thus glorg features four soothing melodies to bash enemies over the head to.

I also persuaded my good friend and partner in crime Jonas to do a cover for the game in the good old style of “cover unrelated to actual game”. I absolutely love this picture to bits.

Now begins the work of finding a sponsor, the game is up on Flash Game License or if  you so prefer, you can contact me directly by email.

Update Aug 27: It seems FGL’s approval queue is pretty backed up at the moment, this took me a bit by surprise,  sadly there’s not much more to do than wait. Sorry about that.

fast as a shark

So, I didn't just talk at nomoresweden made a game too. A really bad one. It's called fast as a shark, and you can play it below.

The whole game, save for some code I had lying around since earlier for the water was made between 1:46 and 1:59 in the timelapse (i'm the guy in the pink t-shirt).

i don’t care about your input

A couple of weeks ago I went to the excellent indie gathering no more sweden. This year we didn’t only make games, we had talks too, so I figured I’d try and do one. It’s about 15 minutes long and features the first public preview of what glorg looks like nowadays. Enjoy!